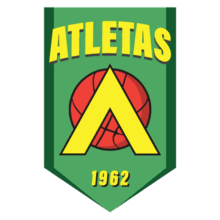 News from the Aquarius X-Mas Tournament.
There has been a lot of rescheduling the last couple of weeks, as the decision was taken to register only teams from countries belonging to the European Union and the Shengen zone (plus the U.K.).We are however happy to announce that we were able to add some very interesting teams to our roster.
First team that we want to present is Atletas Kaunas from Lithuania, where basketball is almost a religion. Atletas participated twice in the past and wthey won the 2011 edition in MU19. Ten years later, they are back, and there is more good news: they will also bring a Women Under 19 team. So, for the first time, a Lithuanian girls team will compete at the Aquarius X-Mas Tournament !